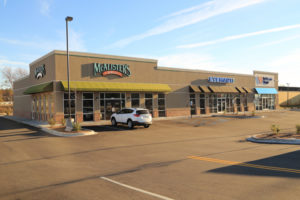 "I was referred to Davie Construction Co. by another developer who had worked on a project with them up the street from my project site. I knew they had good familiarity with the market and strong relationships with subcontractors in the area. They beat the other general contractor that I had used in the past in price and checked all the boxes on their bid. I met Carl Carney and was very comfortable with the selection of Davie Construction Co."

“There was a challenge with this project in that one of the three tenants had another contractor involved who was hard to work with. Davie Construction Co. Project Manager Drew Steelman and his team showed patience and self-control, seeing the bigger picture, as they found a way to work collaboratively with this difficult individual to the benefit of our project. That impressed me.

Aside from that situation, it was a straightforward project with no other issues or delays. Davie Construction Co. built out what the architect drew on time and on budget. I found Carl and his team to be competent, honest and serious, and I would certainly work with them again on future projects.”